For a good part of the twentieth century the exploitation of the mining resources represented the most important business activity for the Germanasca Valley. Among the minerals mined, talc was certainly much more important than graphite or marble. Mining helped to cut down emigration, but it also caused an occupational disease like silicosis and many serious or fatal accidents. A mine was made up of several galleries that crossed one another: each branch line was numbered, but the numbers were not written anywhere underground; they were known by experience by all the miners. At the beginning of each shift the foreman would set the tasks, stating the number of the gallery assigned to each working unit. All the units were made up of two miners, one first class who took command and one second class who cooperated with the former. The workday consisted of two shifts of ten hours each at the beginning of the century, reduced to eight hours in the 1920s.

With the model can be followed through several stages of work in the mines and one can imagine the spaces of everyday life of the miners: the barracks, tunnels, passages through the mountains. Thanks to the beautiful models can also revise the "Funicular Count Brayda" great work for those years, built in 1893 to shorten the downstream transport of talc products mines Sapatlé and Malzas and the village of Poumarat. This is situated at 1,191 meters above sea level, is the highest village on the sunny side of the valley Faetto on the left side of the river Cialancia. According to oral tradition, was founded by a Ferrero escaped the persecutions against the Waldenses in the low Chisone valley. 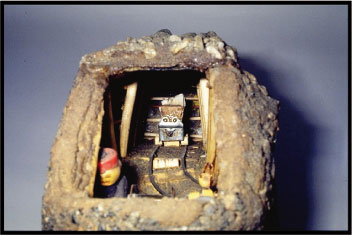