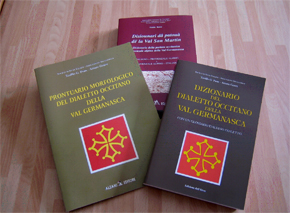 The Occitan Library , Library is located on the first floor at Scuola LatinaLatina and it is named after Professor Arturo Genre. It is a multimedia documentation centre about local Occitan culture, with particular reference to the area of Chisone, Germanasca and Pellice Valleys.

The "core" of the Library is the complete collection of two local scholars, Arturo Genre and Teofilo G. Pons.

In addition to this collection, there are texts (books, brochures, degree thesis) and audiovisual aids (music CD, DVD) containing studies, researches, dictionaries and grammars, songs and music, films and documentaries, linked to the alpine Provençal language and to the Occitan culture in general, but also to the material culture. .

These two deeply linked aspects, are also both present in the exhibition "The old Crafts" and in the documentary works about traditional works on the mountains ( for example the documentaries "To grow buckwheat" and "to grow grapevine")

In the Library there are also unpublished documents (both on paper and computerized) .

Finally, the presence of texts and documents in French witnesses the attention that the Library has for the second minority language of the valleys.

The Library makes the use of its heritage available to scholars, researchers and in general to all interested, curious and keen people willing to know local and Occitan culture and to deepen its contents.
The Library also undertakes an important task towards the schools and the population thanks to the activities of preservation and enhancement of the minority languages, made together with the local "Comunit?Montana" " (Valley administration Council), with the cultural Association La Valaddo?/a> and with the Waldensian Cultural Centre..

The activities of the Language Counter and the projects financed by the Law 482 of 15.12.99 for the preservation of the historical minority languages are also connected to the Patou?Library.

Opening timetable of the Library:
> Tuesday and Wednesday from 3 pm to 6 pm – Thursday and Saturday, from 9 am to 12

While Pandora Bracelets shopping on the web for jewelry ensure that you stick your Louis Vuitton Bags decision with light jewelry since it always look more attractive. Beats By Dre Choose designer pieces. Though they might be a small costly but in the end Gucci Bags you are spending money on craftsmanship which makes you stand apart within the crowd. Mbt Schuhe Online Shop Think about the occasion that you make the purchase. Choose them in accordance with the occasion that you are going to put them on. Avoid wearing Louis Vuitton Sac which is dominant within the look of the outfit. Basic reason for wearing jewelry would be to enhance the look of the dress and never to burden plan the flashy Pandora Charms